S/S ”Skjelskør” was built in Svendborg in 1915. Up until 1962 she was busy running between Skælskør, Agersø and Omø, with each trip lasting about two hours.

During the years she has put up with quite a lot: Carrying cattle on the fore-deck, taking a radiotherapy van to Omø, not to forget the trip with a large combine harvester, which jutted out over both sides of the ship.

Whether it is true that they also had to carry out the smoke in buckets is yet to be proven.

S/S ”Skjelskør”s days in Roskilde Fjord are now more quiet – she sails as a living memory of the steamships´ glorious era. She is a genuine steamer in the sense that she has a coal-burning piston engine contrary to, for exampel, the oil-burning turbine steamers.

With her 75 horse power noiseless engine she makes up to 7 knots (about 14 km/h). The main engine is a 2-cylinder compound steam engine built in Hamburg in 1914 by Steen & Kaufmann in Elmshorn. The engine works with a pressure af 10 atmospheres.

The Society for the Preservation of Old Ships acquired the steamer in 1963 just before the blowtorches were going to change her into scrap. Since then the members of the club have spent countless hours preserving and maintaining the ship.

Every single member of the crew and office team works for free, so that the whole income is used for the preservation of the ship. The Society for the Preservation of Old Ships is happy to have acquired S/S ”Skjelskør”, as she is one of the most seaworthy veteran ships in Denmark.

So, although you will not meet any tropical storms on Roskilde Fjord, we wish you to know that you are quite safe onboard, and all crew members – from skipper to stoker – have their papers in order. 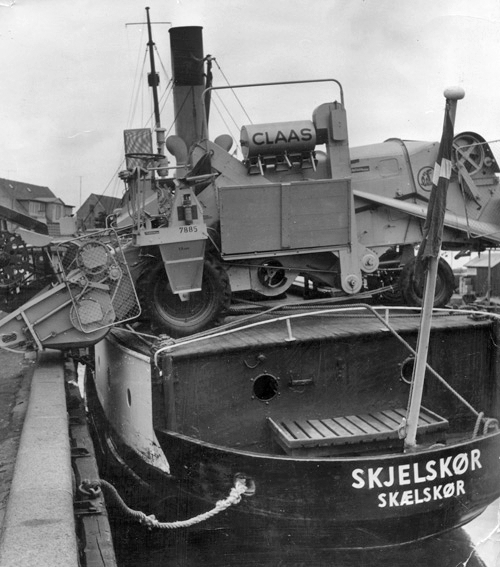 When Skjelskør was the only connection from the outside world, she had to carry some odd loads